An truly dreadful evening in Basingstoke with driving rain and strong winds.  Despite the conditions a large crowd has gathered to see recently overhauled Flying Scotsman.  Running around 15 minutes late, 60103 is seen here getting away from Basingstoke following a water stop.  However, we learned later that the locomotives injectors had failed and for much of the remaining trip the Class 47 Diesel at the rear was required.  60103 was returning to London Paddington following a trip to Salisbury. 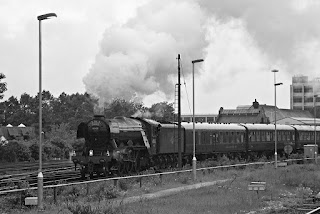 Some sound too on Soundcloud here.

By way of a contrast, here is the same locomotive in January 2004 at Fleet Station, the last time we saw Flying Scotsman before its lengthy and complicated (and expensive) overhaul: 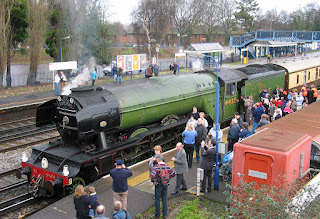 5MTeam
A new website to take over from www.fleetsteam.co.uk which was looking a little outdated. Some of the content will be updated over time. Some posts include a link for a sound recording. These will be greatly enhanced by the use of any kind of headphones, but some tracks contain sudden loud noises, watch your hearing!